2021 started off with a bang as the relatively wild week comes to an end. Over the week, the Georgia Senate runoff elections and subsequent events at the Capitol Hill hit the headlines across the globe. Democrats surprisingly won both Senate seats in the Georgia runoff race despite the close race, cementing a full control over all 3 branches of power. Markets however reacted positively towards the resultant ‘Blue Wave’ in anticipation of more fiscal stimulus on the way, all 3 major equity indexes hit new record highs and were up 1.27 – 1.42% year-to-date ending Thursday. Another notable event in the week took place in the Capitol Hill, where the certification of Electoral College voting results were briefly interrupted as protestors stormed in. After the situation calmed down, the Congress resumed and confirmed Joe Biden win, who will take office on 20 January. As for fundamentals, ADP nonfarm employment figures were disappointing as it went negative once again, other PMI figures however remained in the expansion zone, reflecting the positive overall business sentiment and participants look forward to the post-vaccination era. Next week, the US will release CPI, retail sales, and Michigan Consumer Sentiment figures.

COVID remains one of the key issues in 2021, WHO warned that the continent is at tipping point as cases surge, the organisation urged countries to adopt stricter measures to curb the spread. Vaccination programmes are carried out throughout Europe, which is hopefully enough to bring the infection rate as population immunity builds. European equities had a modest start with the UK, French, and German equity indexes gaining 1.82 – 6.14% since the start of 2021. Setting the pandemic aside, Brexit was also another point of concern, as retailers and customers get the first taste of a reenacted border, complicating VAT rules also posted as surprises to both sides, numerous companies have decided to halt international deliveries for the time being to avoid overcharging their customers. As for economic fundamentals, most CPIs and PMIs fell below market expectations, highlighting the impacts of the ongoing pandemic and lockdown. Next week, we will get more data on industrial production in the Eurozone and the UK, and also the preliminary GDP figures in the UK and Germany.

Entering the New Year, both Hong Kong and Chinese equities continued to edge higher. As of Friday, the Hang Seng Index rose 2.38% year-to-date and the Hang Seng Technology Index rose 2.43%, China A-shares saw larger gains, with the CSI 300 Index 5.45% higher. Earlier, US President Donald Trump signed an executive order banning US transactions with eight Chinese apps, including Alipay and WeChat Pay, which weighed on the performance of some Hong Kong-listed technology leaders, such as Alibaba, which is still down year-to-date. On the other hand, the New York Stock Exchange reversed its decision to delist three major Chinese telecoms companies, sending the shares down again. As for economic data, China will release the CPI and import/export data for December next week. 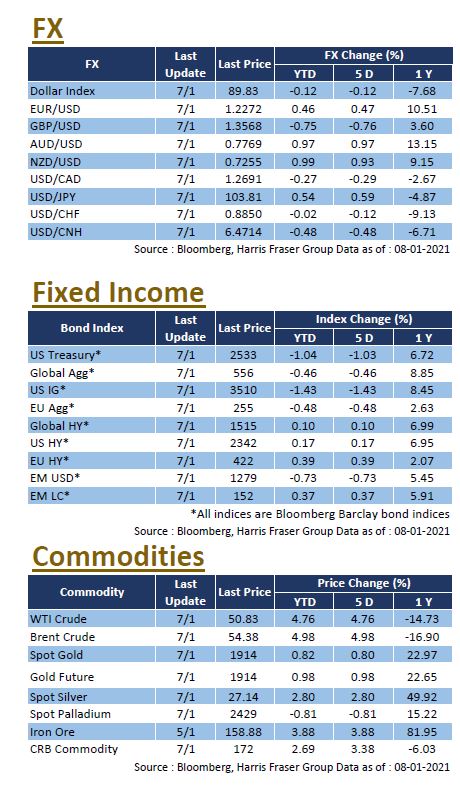 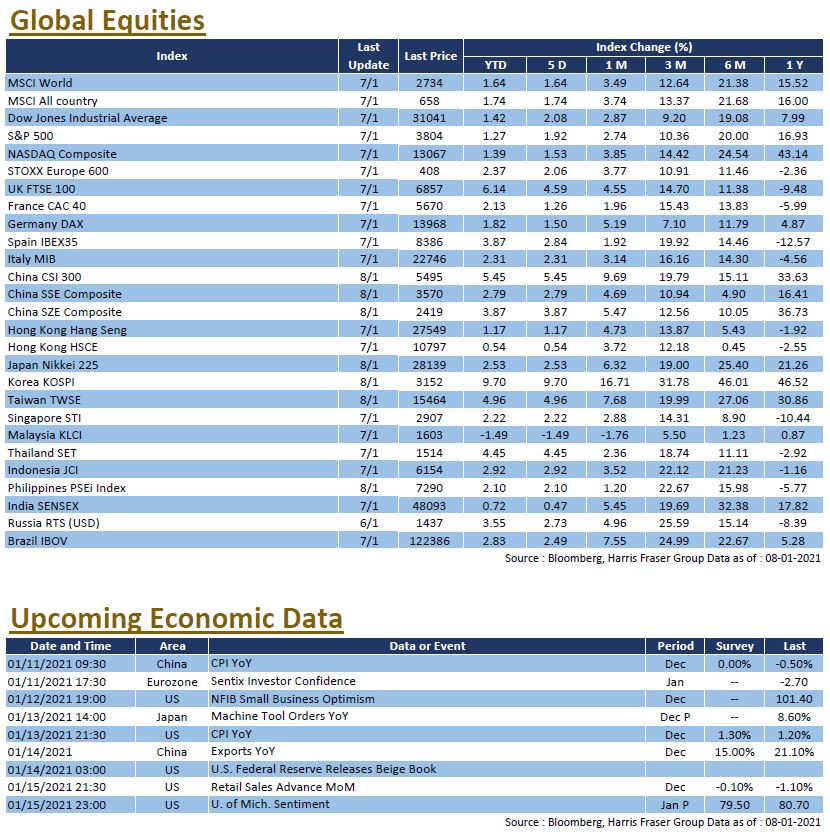