US stocks continued to reach new highs on the back of strong economic data and corporate earnings. The US GDP rose sharply by 6.4% QoQ in the 2021 Q1, while the April Consumer Confidence Index rose to a pre-epidemic levels of 121.7. US corporates also reported strong quarterly results, with more than 87% of the 284 reporting companies beating market expectations, with an average earnings growth of more than 53% YoY.

On the monetary policy front, the US Federal Reserve kept interest rates and the scale of asset purchases unchanged. Fed Chairman Jerome Powell said there was a one-off upward pressure on inflation, but saw it only as a short term phenomenon that will likely not last, and further reiterated that the current interest rate policy is appropriate before employment and inflation targets were met. On the eve of US President Joe Biden’s 100th day in office, he mentioned that it was time to make US corporations and the richest 1% of Americans pay their fair share of taxes. He also mentioned the $1.8 trillion American Family Plan for the next 10 years, which will be partly funded by the increased tax on the wealthy. Next week, the US will release a series of economic data, including the ISM manufacturing and services indexes for April, alongside non-farm payroll data.

European equities had mixed performances, the UK and French markets were up 0.33% and 0.56% respectively over the past 5 days ending Thursday, while German indexes were down 1.09%. Inflation accelerated in Germany, with the German CPI for April rising above 2% YoY for the first time since 2019. European Commission President Ursula von der Leyen said the €750 billion EU Recovery Fund will be out soon. On the other hand, ECB President Christine Lagarde said it was still too early to tell whether the impact of the epidemic on the economy was over. However, she expects that 70% of the Eurozone population will have received their first dose of the vaccine by the end of June, so the odds of a strong rebound in the second half of the year are good. Next week, Eurozone retail sales figures for March will be released.

Weak economic data weighed on the mainland stock market ahead of the Labour Day holidays, with the CSI 300 index falling 0.23% over the week. The Hong Kong markets also faltered, the HSI was down 1.22% for the week as tech heavyweights fell on Friday on news that they had been summoned by state authorities. For economic data, China’s official manufacturing and non-manufacturing PMIs slowed down to 51.1 and 54.9 respectively, while the China Caixin manufacturing PMI further improved to 51.9. On the other hand, regulatory actions were taken against Chinese online platforms, with 13 companies, including Tencent and ByteDance, being summoned by regulators and asked to rectify irregularities in their businesses, it was reported that the authorities are ready to issue a fine of at least RMB 10 billion to Tencent. Next week, China will release data on exports and foreign exchange reserves. 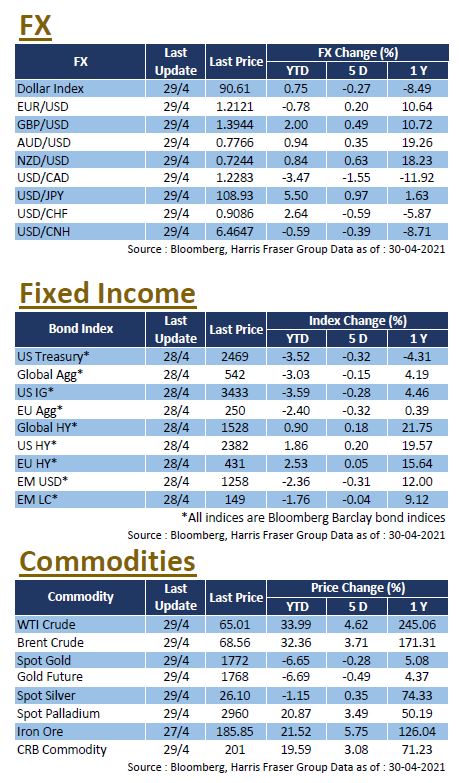 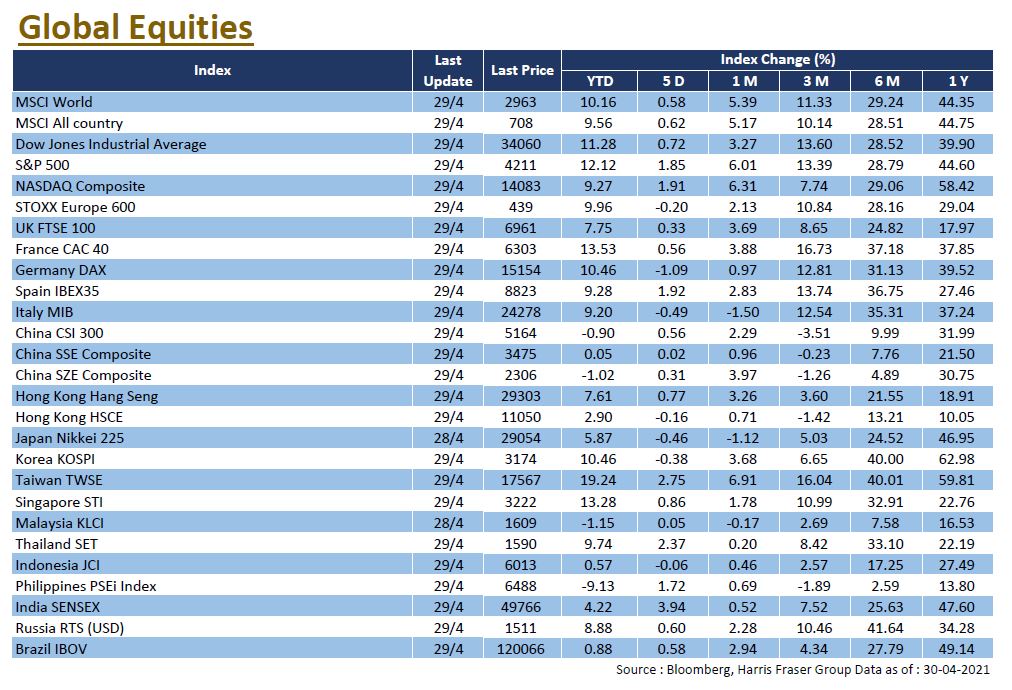