The recovery in global demand led to a strong rise in commodity prices, which in turn boosted the Dow to a new record high, but Yellen's comments on the possible need to raise interest rates in the future triggered a sharp drop in US technology stocks. Over the past five days ending Thursday, the Dow rose 1.43%, while the S&P 500 and the technology-heavy NASDAQ fell 0.23% and 3.19% respectively. Recent data from the US showed further improvement in the economy and job market, with the service PMI posting its second highest increase on record in April, and the number of people claiming initial unemployment benefits falling to a record low since the epidemic.

Base metal prices, including copper, steel, and iron ore, hit record highs, buoyed by infrastructure and consumer demand. Whereas food prices, such as corn and soybeans, also rose to new highs in eight years. As the market anticipates a strong inflationary cycle, US Treasurer Yellen expressed the possibility of higher interest rates in the future, sparking concerns about the relatively expensive technology sector and resulting in a sell-off. Meanwhile, the market is expecting the US Consumer Price Index to rise by 3.6% YoY in April, well above the Fed's target of 2%. Next week, the NFIB Small Business Optimism for April and the University of Michigan Market Sentiment Index for May are also due for release, market expects them to further improve.

With technology stocks being a relatively small part of the European stock market, European stocks were relatively stable, with the FTSE 100 up 1.62% and the French CAC up 0.87% over the past 5 days ending Thursday. The Bank of England kept its policy rate and bond buying target unchanged, but slowed the pace of purchases as the Bank expects the domestic economy to return to pre-epidemic levels within the year. European economic data continued to improve, with Eurozone retail sales rising 2.7% MoM in March, surpassing the expected 1.5%, and the final services PMI rose to 50.5 in April from 49.6 in March. Next week, Germany will release its ZEW economic forecast for May, and the UK will release its GDP growth figures for the first quarter of the year.

Strong economic data from China failed to deter the market from falling. It was rumoured that Biden might keep the China investment ban in place, weighing on the performance of Chinese ADRs and the sentiment spread over throughout the Hong Kong and Chinese markets, the Hang Seng Index and CSI 300 index were down by 0.40% and 1.86% respectively for the week. On the data front, the Caixin China Services PMI rose to 56.3 in April, hitting a 4-month high. Exports in US dollars grew by 32.3% YoY in April, beating market expectations of 24.1%. Hong Kong's economy also performed well, GDP grew by 7.8% YoY in 2021 Q1, well ahead of market expectations of a 3.7% growth, and reversing the trend of six consecutive quarters of recession. Next week, China will announce the CPI and PPI figures for April, both which are expected to be higher than in March. 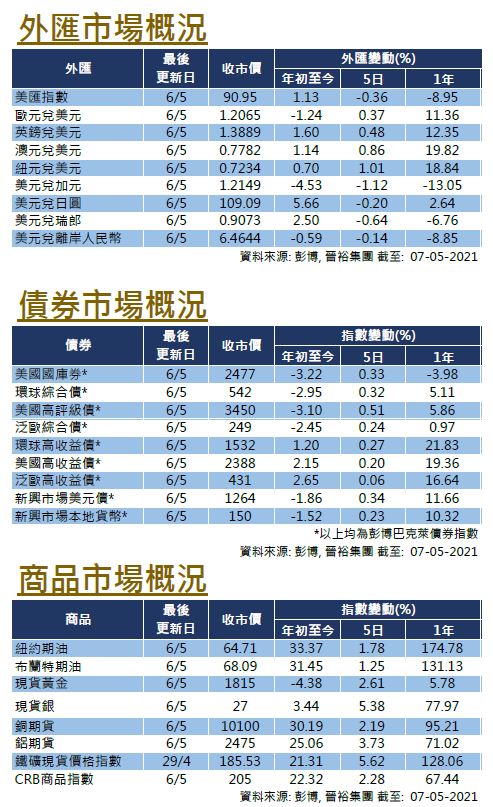 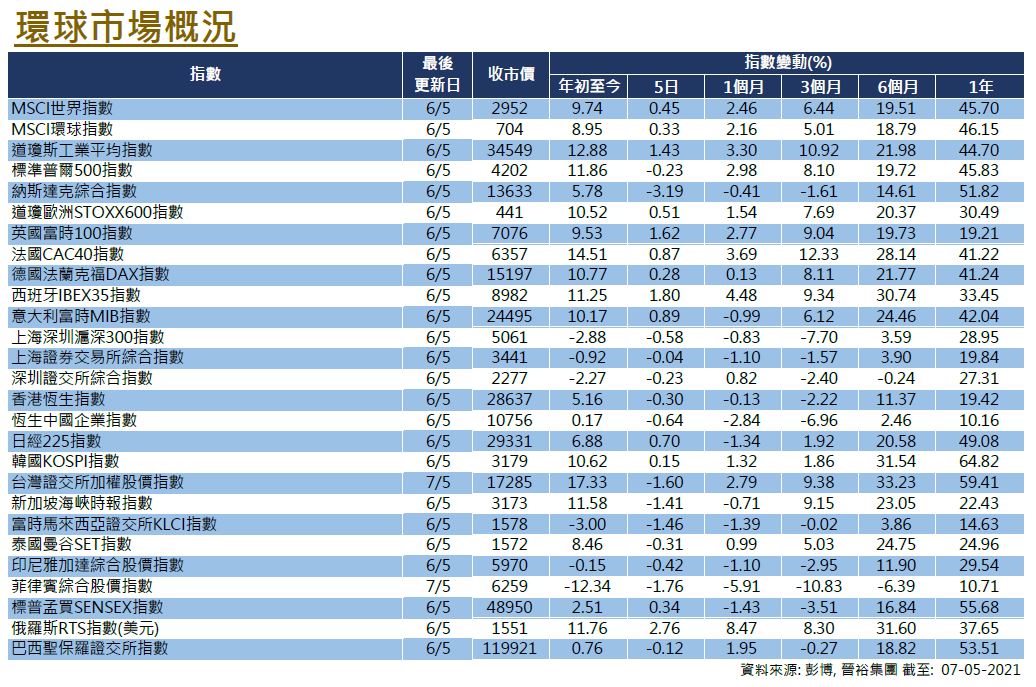