While the Delta variant continued to threaten global markets, steady economic figures in the US and the positive Q2 corporate earnings bolstered US equity performance, with the Dow, S&P 500 and NASDAQ gaining between 0.17% and 0.97% over the past five days ending Thursday. According to the World Health Organization, the Delta variant is spreading rapidly across the globe, with records showing that the strain is now present in more than 104 countries. At the moment, there are approximately 580,000 daily COVID cases worldwide, up from a low of around 300,000 in June.
Nevertheless, the market is also watching Q2 US corporate earnings closely. Of the 111 S&P 500 constituents reporting, about 87% beat market expectations, reflecting the continued strong earnings momentum of US companies. In particular, Goldman Sachs, Citi, and Wells Fargo all beat market expectations by at least 40% in their quarterly net profits. Tech giants such as Amazon, Apple, Facebook, and Microsoft will also announce their Q2 results by the late July. Next week, the Federal Reserve will hold its interest rate meeting, and the US will release its preliminary GDP for the 2021 Q2

Recent performance of European equities pales in comparison to that of the US, with the STOXX 600 index only up 0.39% over the past five days ending Thursday. The ECB kept interest rates and the size of its bond purchases unchanged after the interest rate meeting, but revised its forward guidance on inflation, noting that the ECB want to see inflation at 2%. President Christine Lagarde said the current pick-up in inflation is expected to be transitory, and expects it to rise further in the coming months before subsiding early next year. Lagarde said that there will be no premature tightening of monetary policy. On the economic front, the Eurozone manufacturing PMI for July was 62.6, slightly above market expectations of 62.5. Next week, the Eurozone will release the preliminary GDP for Q2 2021, the unemployment rate for June and the CPI data for July.

The Mainland markets were back and forth over the week, while Hong Kong stocks were under pressure, mainly due to the weak performance of large cap technology stocks. The Hang Seng Index fell 2.44% for the week, while the CSI 300 Index dipped by a modest 0.11%. According to reports, China is weighing punitive measures against DiDi, which could include fines or even demands to delist. The market is focusing on how this might affect others in the tech sector. In addition, sports stocks came under increased selling pressure on Friday, with sports brand Li-Ning's share price falling 14% in a single day, as the market expects the Olympic effect to end. Education stocks also fell sharply on Friday, with New Oriental being the worst hit, down 40% for the day. Next week, China is set to announce industrial profit figures for June. 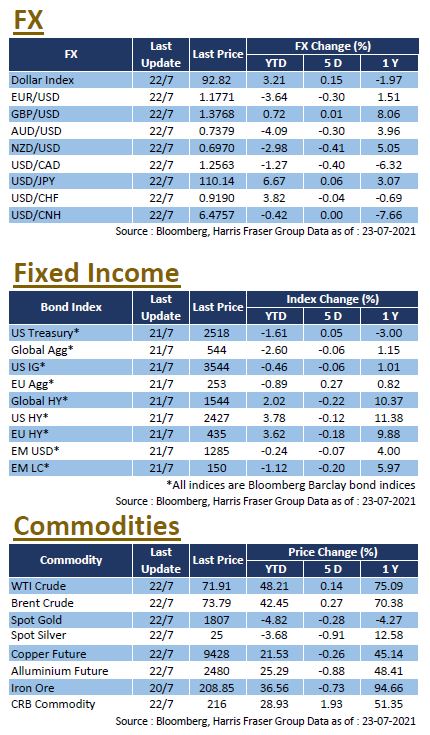 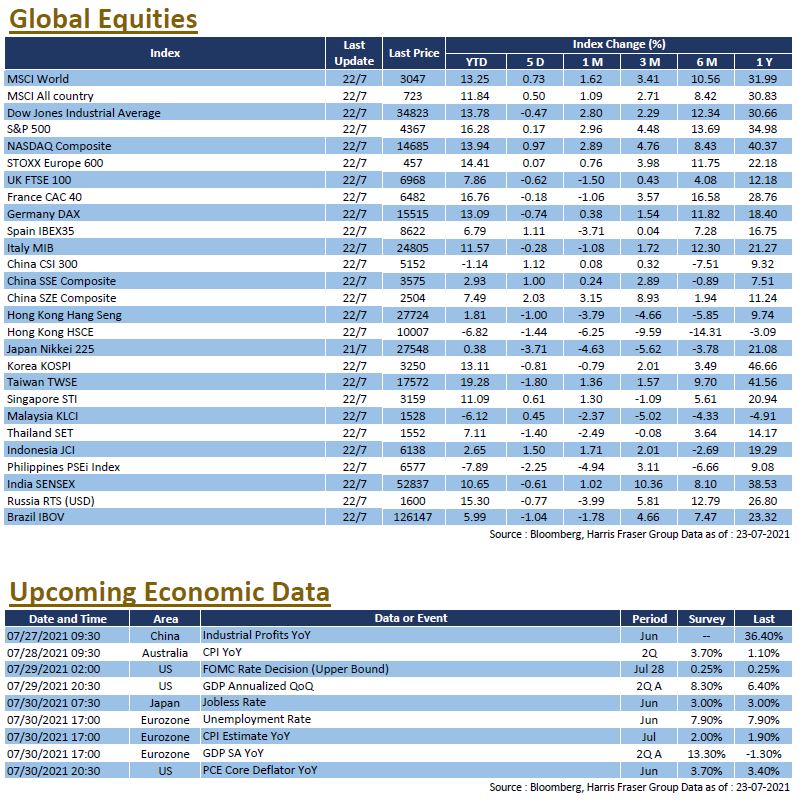