The revised US GDP growth for 2021 Q1 was unchanged from the earlier initial value, and the recovery trade continued to support the market. The Russell 2000 small cap index in particular benefitted from the strong domestic economy and outperformed other major equity indices, the index was up 2.96% over the past 5 days ending Thursday, while the S&P 500, Dow and NASDAQ were up 1.00%, 1.12%, and 1.48% respectively over the same period.  Although US Federal Reserve officials have repeatedly downplayed the risk of inflation, two Fed vice chairmen have also expressed interest in future tapering discussion. In the face of accelerating inflation, US President Joe Biden said that measures would be taken in the coming weeks to ease the supply pressure, including construction materials among other things. US Treasury Secretary Yellen gave a timeline for the inflation outlook, predicting a higher-than-normal rate for the year.

With the Biden administration set to announce its budget soon, it was reported that US federal spending will rise sharply to US$6 trillion in the next fiscal year, and that the US federal debt will reach 117% of GDP over the next decade. So far, members of both parties have expressed reservations over Biden's budget proposal. Incidentally, there are reports that the Bank of Japan will consider extending its epidemic relief measures for another six months, which are originally due to expire in September, while the IOC has said that both the EU and Japan have reiterated their support for a safe Tokyo Olympics. Next week, the US will release CPI and employment data for May.

European shares followed global markets higher on the back of positive economic data, with the UK, French and German equity indices gaining between 0.02% and 0.77% over the past 5 days ending Thursday. The Eurozone economy continued to improve, with the preliminary consumer confidence index rising from -8.1 in April to -5.1 in May, and the improving economic data also cooled expectations of further monetary easing from the European Central Bank, a Bank of England official even hinted at the possibility of an earlier rate hike. However, ECB President Christine Lagarde said that it was still too early for the central bank to consider scaling back its €1.85 trillion pandemic emergency purchase programme (PEPP). She noted that the ECB is committed to using the PEPP to maintain favourable financing conditions until at least March 2022. Next week, the Eurozone will release unemployment rate for April and CPI data for May.

Hong Kong stocks benefited from the expectations of the southbound fund flows, driving the Hang Seng Index up by 2.34% over the week, while the CSI 300 Index rose 3.64%. On the Hong Kong side, the MSCI index changes took effect after Thursday's market close, where about HK$90 billion of transactions were recorded during the closing auction, pushing the market turnover up to HK$250.5 billion. On the other hand, the RMB continued to appreciate in tandem with rising raw material prices, reaching its highest level against the US dollar since 2018. However, the People's Bank of China said that the RMB exchange rate is not a tool to offset the rise in commodity prices. Next week, China will release data such as the official manufacturing PMI and the Caixin China Manufacturing PMI. 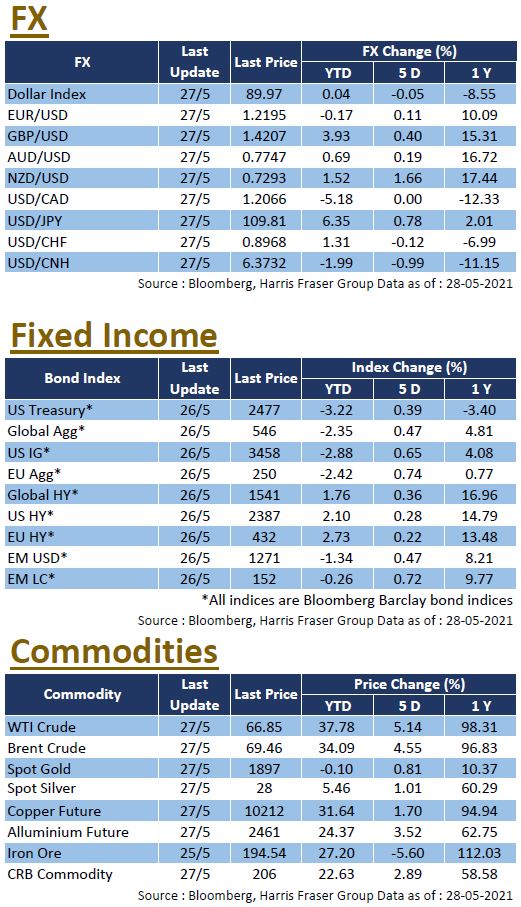 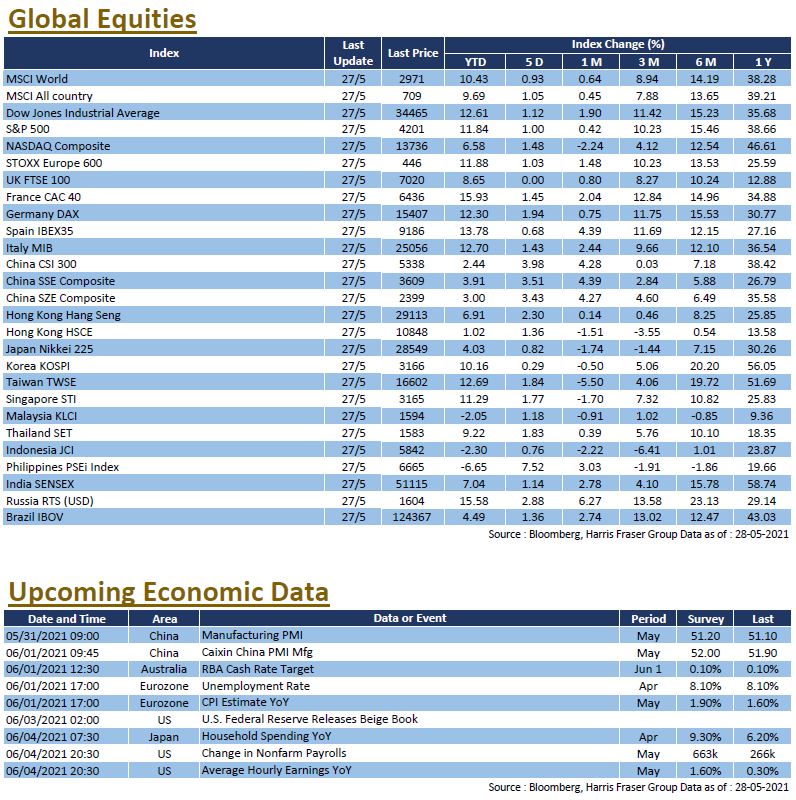