Despite the inflation in the US reaching a post-2008 record high, the Fed Chairman maintained his dovish stance, which was positive for market sentiment, as the U.S. stock market hovered around its all-time high. Over the past 5 days ending Thursday, the Dow gained 1.64%, the S&P 500 rose 0.91%, while the NASDAQ was weighed down by technology stocks, down 0.11%. The US Consumer Price Index (CPI) rose by 5.4% YoY in June, the largest jump since 2008, although US Federal Reserve officials said inflation was only transitory, different governors expressed divergent views on the monetary policy. Chairman Powell stressed that it was not the time to taper bond purchases, while the St. Louis Fed President urged a tapering of bond purchases, saying that both employment and inflation targets had been met; the Chicago Fed President said policy should be adjusted by the end of the year, and interest rate hikes would have to wait until 2024. US Treasury Secretary Yellen said she would discuss with President Joe Biden whether to nominate Powell for a second term, and the market is assessing the impact of different candidates on the administration's monetary policy. As for crude oil prices, upward pressure was eased in the short term as the deadlock in the UAE-Saudi Arabia talks showed signs of easing, with OPEC+ expected to reach consensus on increasing production. The Organization of the Petroleum Exporting Countries (OPEC) is forecasting a gradual recovery in oil demand for this year and the next. Next week, the US Manufacturing and Services PMIs will be released.

European equities as a whole followed the US market and consolidated at all-time highs, the French and German markets gained 1.51% and 1.36% over the past 5 days ending Thursday, while the UK index fell 0.27%. European Central Bank (ECB) Board member Isabel Schnabel said the ECB would need to see a rise in core inflation before considering adjusting its outlook and tightening its policy. President Christine Lagarde said in an interview that the ECB would not tighten policy prematurely as it did in the past to avoid repeating the same mistakes. On the other hand, the EU finance ministers approved an investment plan for 12 member states which, according to the EU executive committee, is estimated to be worth €800 billion and could boost public investment to 3.5% of the region's GDP next year, in a bid to boost the recovery after the epidemic. Next week, the ECB will hold an interest rate meeting on 22 July, and the Eurozone will also release manufacturing PMI data for July.

Despite the recent choppy sessions in the Mainland markets, Hong Kong equities rebounded on the back of dovish signals from the US, and expectations of the return of Chinese companies to the city, the CSI 300 Index rose 0.5% for the week, while the Hang Seng Index was up 2.41%. On Friday, news that China may waive cyber security checks for Hong Kong-listed companies reinforced expectations of more Chinese companies returning to the Hong Kong market, shares of HKEx hit a five-month high. China's GDP grew by 7.9% YoY in the second quarter, roughly in line with market expectations, indicating a stabilisation of the economy. China will announce the quoted market rates for 1-year and 5-year loans, LPR. 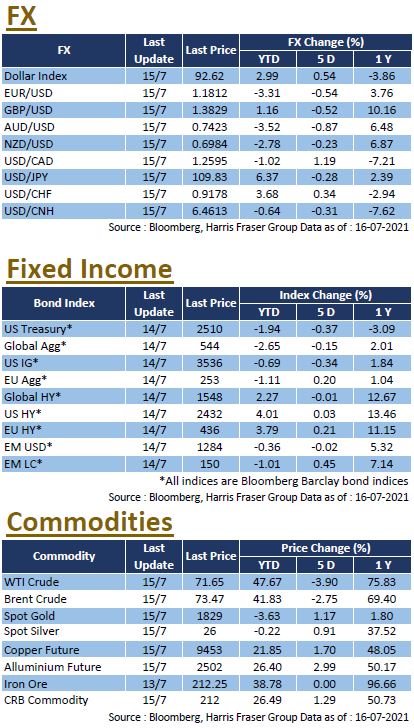 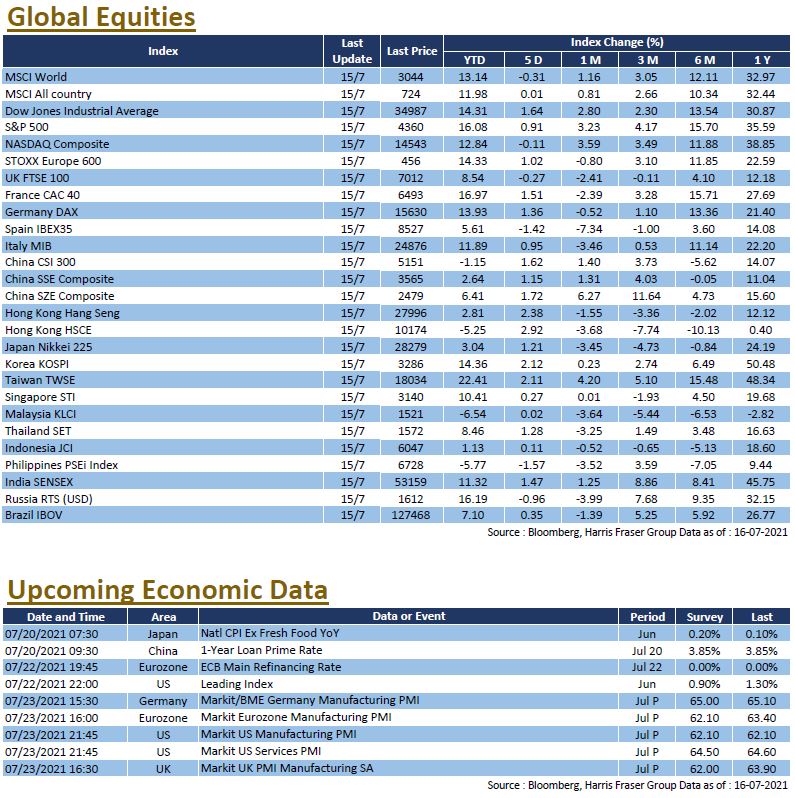