Anticipating a swift approval of the latest spending bill, together with encouraging quarterly earnings from tech leaders, the S&P500 and the NASDAQ continued to set record highs, over the past 5 days ending Thursday, the tech heavy NASDAQ gained 1.84%, the S&P 500 was up 1.19%, and the Dow was down 0.14%. The US House of Representatives is currently planning to vote on a near US$2 trillion spending plan which, if passed by the House, will then go to the Senate. In addition, President Joe Biden will announce Fed nomination soon, which could impact market expectations of the pace of policy tightening. As for the renewed debate on the US debt ceiling, US Treasury Secretary Yellen said that the Treasury's cash could run out after 3rd December. The market is concerned about the potential impact of these uncertainties on the market.
On the economic front, US retail sales rose to a seven-month high in October, raising the odds of an earlier Fed tightening. According to five indicators used by Fed to assess the inflation outlook, there is now increasing pressure to accelerate monetary policy tightening than three months ago, St. Louis Fed President Bullard also said the Fed should step up on reducing stimulus in response to high inflation. With the release of the core PCE index for October and the minutes of the November Fed meeting next week, markets will be watching the data and news closely to gauge the pace of monetary policy tightening.

The Governor of the Bank of England said he was very worried about inflation, while the ECB President said rate hikes next year are unlikely, suggesting a potential divide in monetary policy. With the exchange rate moving in different directions, stock market performance also diverged, with French and German equities up 1.17% and 0.86% respectively over the past 5 days ending Thursday, while UK equities were down 1.74%; the Pound rose 1.25% against the Euro over the same period. The UK CPI rose 4.2% YoY in October, surpassing both the previous reading and market expectations of 3.1% and 3.96%. Bank of England Governor Andrew Bailey said he felt ‘very uneasy’ about the sharp rise in inflation and noted that he would study the data before deciding whether to raise interest rates or not. In contrast, ECB President Christine Lagarde stressed that the Bank was unlikely to raise interest rates next year and that she expects inflation to fall below the Bank's target of 2% in the medium term. Next week, both the UK and Eurozone will release the Markit Manufacturing PMI for November, while Germany will release the latest IFO Business Sentiment Index.

The video conference between the US and China leaders showed the way forward for Sino-US relations. However, major banks lowered their price targets for certain Chinese technology giants, sending their Hong Kong listed shares down by almost 11% on Friday, weighing on the overall Hong Kong stock sentiment, with the Hang Seng Index down 1.1% for the week; China A-Shares however stayed flat. Alibaba shares fell sharply after Thursday's US market close, as the company announced much weaker-than-expected net profit for the last quarter, share price plummeted and weighed on the performance of Hong Kong markets. On the other hand, China's economic data showed some stabilisation, with industrial production rising by 3.5% YoY in October, retail sales accelerating to 4.9% YoY and fixed investment growing at a faster than expected YTD. 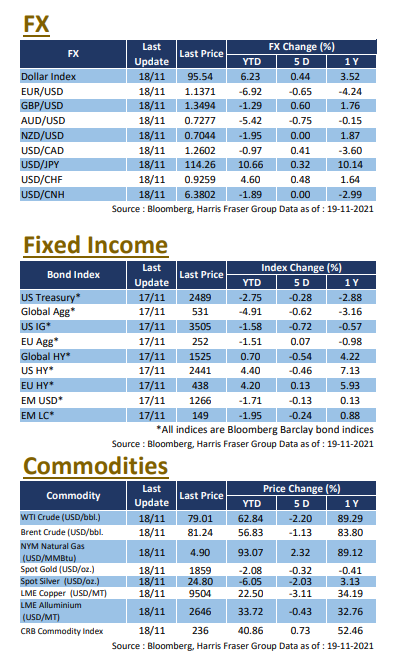 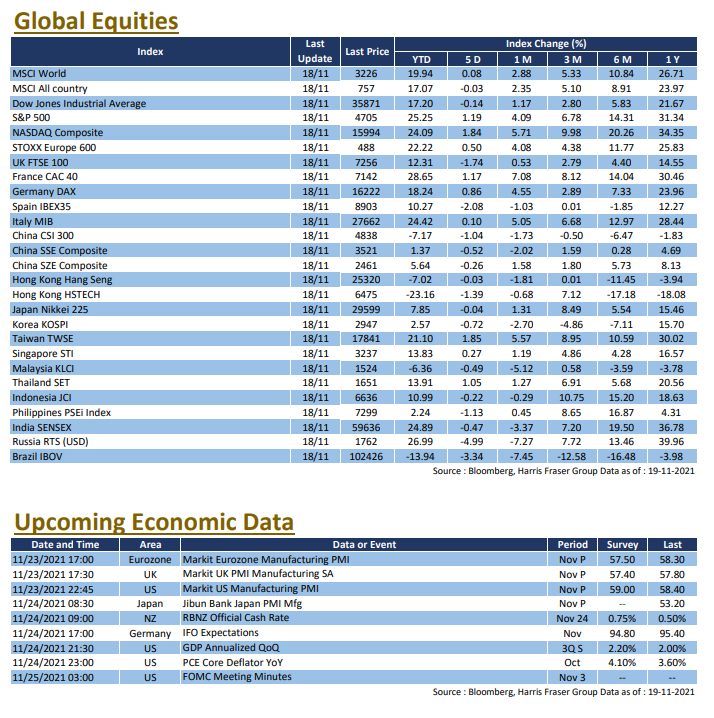