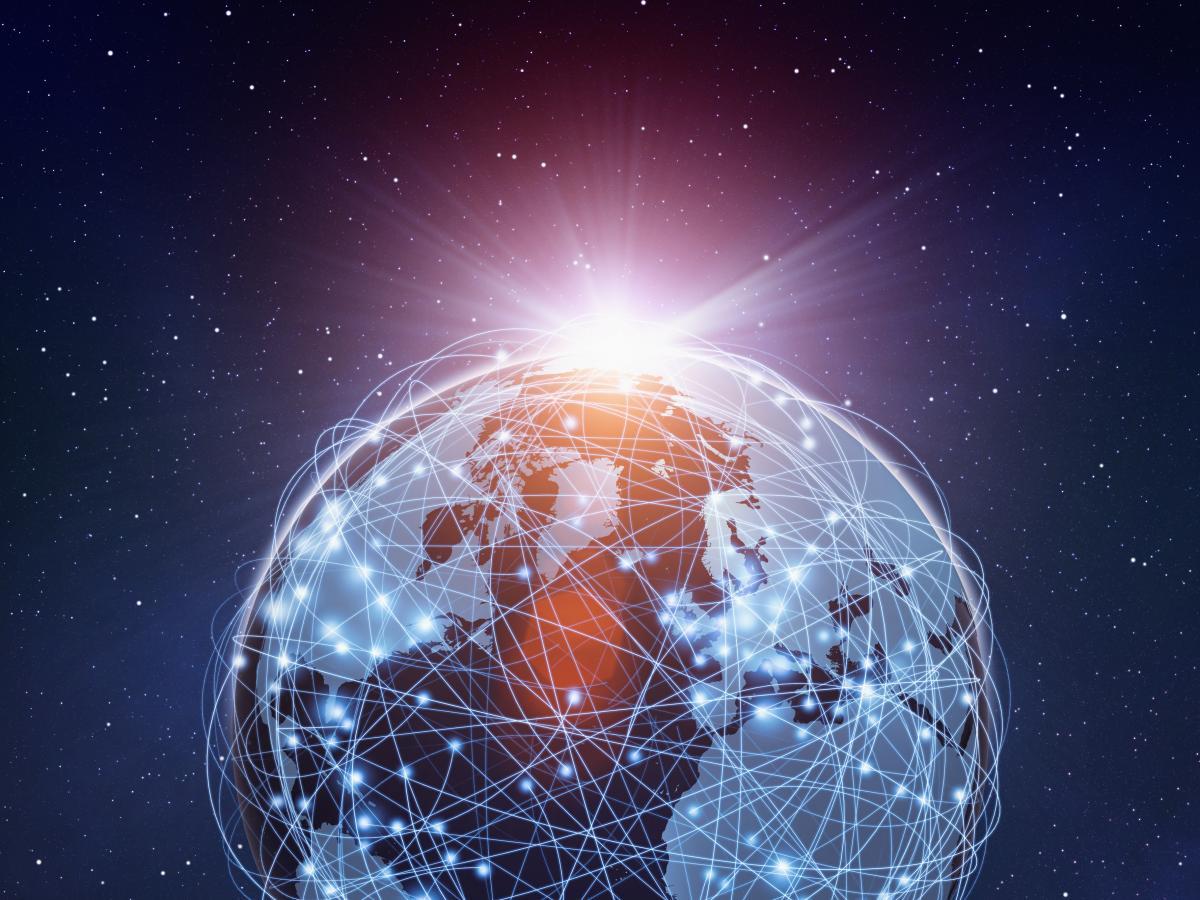 US economic data unexpectedly weakened. NASDAQ fell nearly 2% over the past 5 days ending Thursday, while S&P 500 and the Dow fell more than 2%. The US ISM manufacturing PMI released this week surprisingly fell to a 10-year low. In addition, the World Trade Organization lowered its global growth forecast for this year and the next, worsening market sentiment and causing US equities to fall sharply for two consecutive days over the week. The US ISM non-manufacturing PMI released afterwards also brought bad news, falling to the lowest level in three years. The weak economic data drove market's expectation of two Fed rates cuts in 2019 up, driving the 10-year US bond yield back down to the 1.52% level. The market will focus on the non-farm payroll figures released later tonight.

The WTO authorized the United States to impose tariffs on up to $7.5 billion of EU products, goods such as aircraft will face up to a 10%-25% tariff. The French finance minister said that the EU will make a firm response over the matter. The incident worsened market confidence, causing large drops in European equities on Tuesday and Wednesday. Over the past 5 days ending Thursday, the FTSE 100 and CAC fell more than 3%, while the DAX also dropped more than 2%. The UK Prime Minister Boris Johnson requested the EU to make concessions on Brexit, claiming that the UK is well prepared for a case of “No Deal Brexit”. The European Parliament on the other hand is concerned about the details of UK's Brexit plan. It was reported that even if the EU rejects Johnson’s proposal, the UK administration still has a backup plan. As the Brexit deadline approaches, market uncertainty rose, and GBP/USD is fluctuating between 1.22 and 1.44.

Due to the National Day holiday in China, the Shanghai and Shenzhen stock markets will be closed from Tuesday until next Tuesday, Hong Kong markets was closed on the National Day. Due to drop offs in international markets, Hong Kong equities performed poorly this week, but still outperformed the global markets. The Hang Seng Index fell 0.85% in the week while the H-Share Index fell 0.64%. In terms of economic data, Hong Kong retail sales in August recorded the largest year-on-year decline ever. As for the Sino-US trade relations, US soybean exports rebounded to the highest level in seven months as the tension between the two sides eased temporarily. On the week ending September 26, total sales increased from 1.04 million tons to 2.08 million tons week-on-week. China will release figures on foreign exchange reserves and Caixin Services PMI next week. 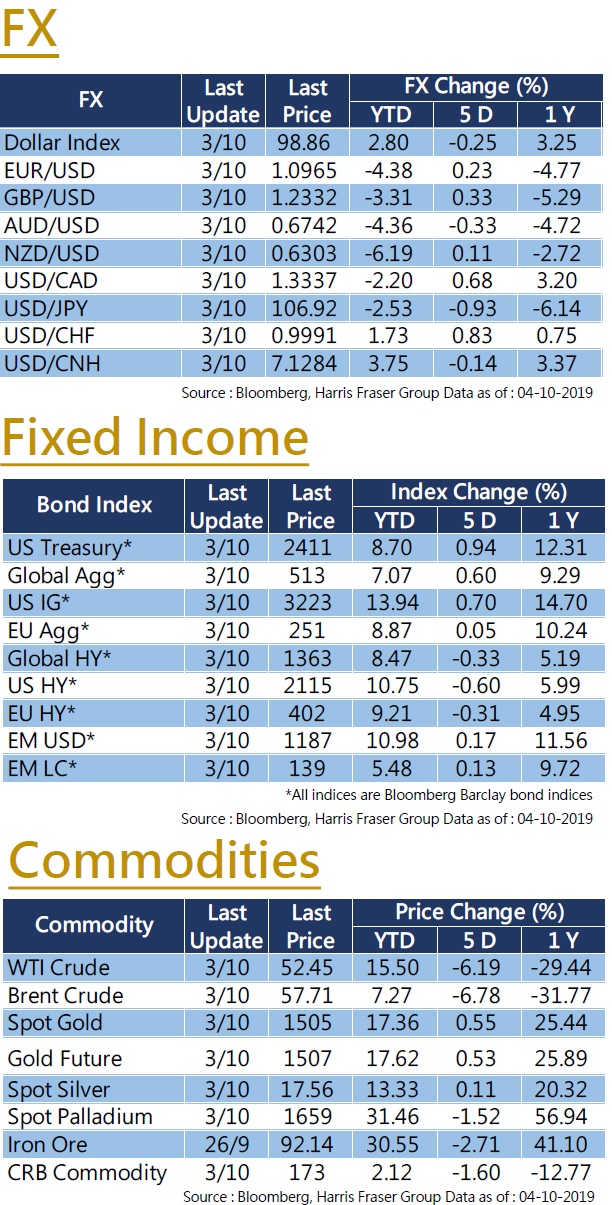 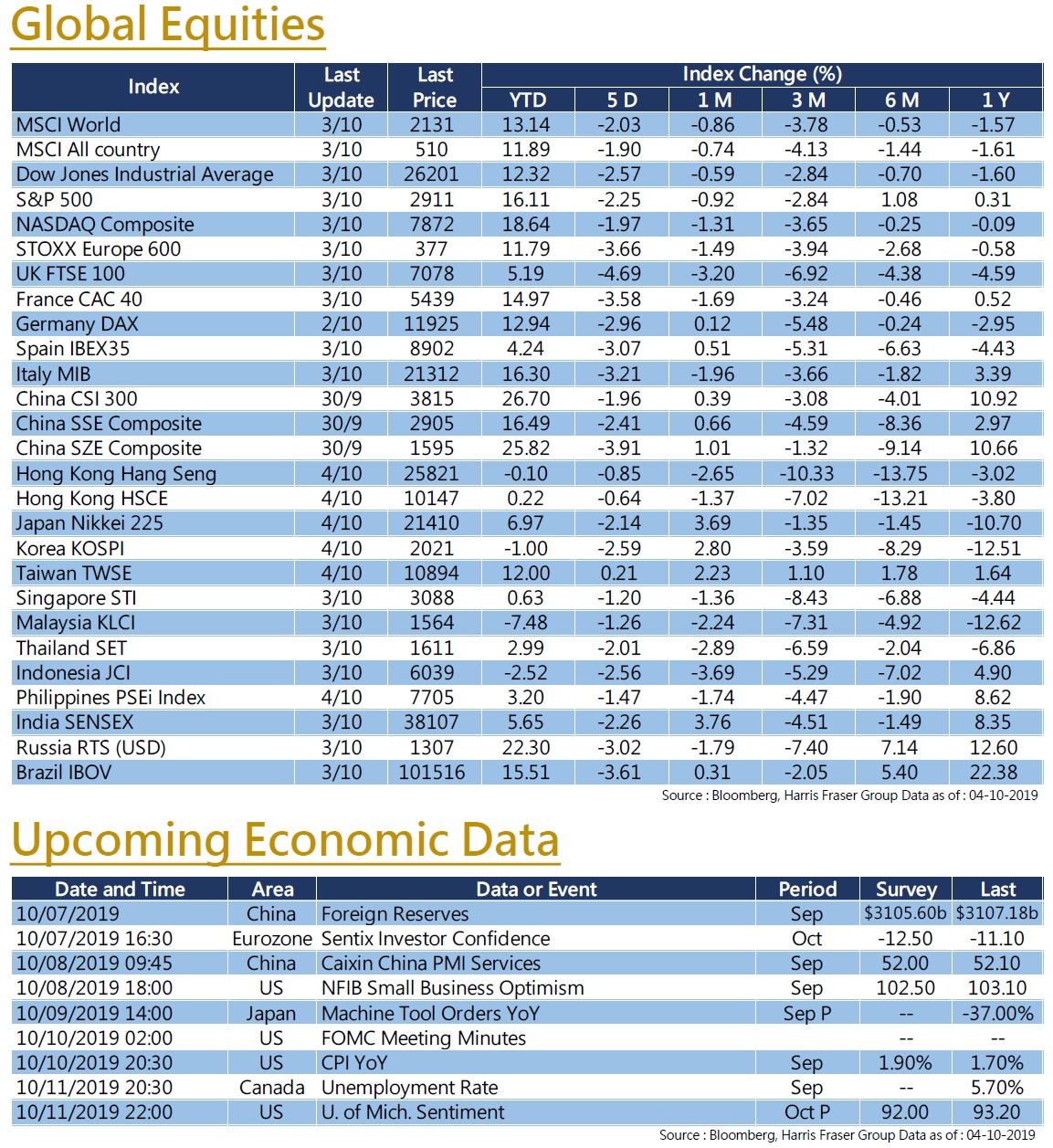 Disclaimers: The above information does not constitute any offer or recommendation to implement or liquidate an investment or to carry out any other transaction. Market information is obtained from sources believed to be reliable but which has not been independently verified; no guarantee, representation or warranty is made and no responsibility or liability as to its accuracy or completeness is accepted. The information may be outside Harris Fraser Group’s control or provided by a third party in which in case Harris Fraser Group cannot take responsibility for their content, or for any delays, interruptions or errors in the provisions of these information. The data is protected by copyright and other intellectual laws and all ownership rights remain with the information service provider or the third party or Harris Fraser Group as the case may be. All copyrights on this Website are reserved.